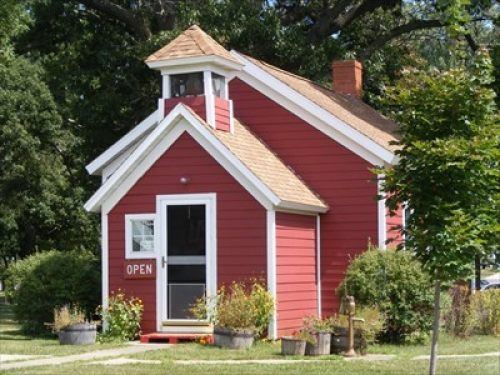 As visitors pass through the doors of The Little Red School House, they step into a single classroom setting where history becomes reality. Kindly greeted by the onsite attendant, they are given a brief history of the school.

The Little Red School House, which was originally known as the Watermill School,  was built in the year 1864 and was located on County Road G, five miles northeast of Tomah, Wisconsin. Watermill School was one of the first schools in the area to supply free textbooks, starting in 1912. In 1914, an entry was added to the school and this was the only addition that occurred. The school closed in 1965, then was purchased by the city and moved to its present location at Gillett Park, (1318 Superior Avenue, Tomah, Wisconsin) where it was set aside as a museum. It became open to visitors in 1967. It is operated by the Tomah Area Historical Society.